Solar as an Investment

An Analysis of Tools Employed to Evaluate the Financial Benefits

of a Solar PV System 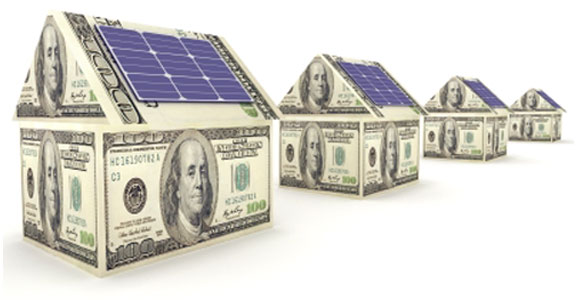 There are a myriad of methods to analyze the financial benefits of going solar.  The idea of tapping into the power of the sun and thereby reducing our reliance on harmful methods of electricity generation is attractive not only as a pure, clean and ecologically sound method of energy creation, but, perhaps equally as important, it also offers a secure, long-lasting, and lucrative investment opportunity that compares very favorably to alternative uses of capital.

The proposal to purchase a solar PV system should be underpinned with financial data that is clear to the customer, but not so simple as to ignore the many long-term financial benefits of the system over its lifecycle.  There are a number of tools of analysis that provide highly effective means for comparing solar as a long-term investment to other financial investments.  Fortunately, the costs and benefits of solar  compare very favorably with alternative monetary investments.

Solar PV as a Hedge Against Rising Energy Prices – But Will Prices Rise?

The ability to lock in pricing to avoid price increases is the essence of self-protection in periods of expected price inflation.  Central to this discussion, however, is the question of whether energy costs will continue to rise in the future.  Energy costs have of course increased historically and there are excellent arguments suggesting that they can be expected to continue to do so into the foreseeable future.  However, the counter argument runs that with the newly available stocks of domestic and inexpensive natural gas, electricity pricing could conceivably decline in the future.

The expansion of electricity generation using cheap natural gas notwithstanding, the price of electricity is based upon three components -- generation, transmission, and distribution costs.  Within these three constituents are a variety of other factors that must be taken into consideration when formulating the end-use cost of electricity. One factor affecting future electricity prices is aging infrastructure that is being replaced or updated, at significant expense, in part to accommodate the integration of renewables into the electric grid.  In addition, the cost of capital has also risen as utility bond ratings have declined in general, along with a broad increase – and anticipated future increases - in overall interest rates. When capital costs increase, so does the amount that rate-payers see on their monthly bills.  Finally, demand in many parts of the country is projected to continue to rise, requiring capacity additions in the future which will be more costly.

To effectively hedge against inflation, you need to lock in rates to eliminate future exposure to price increases.  For a very hypothetical example, if you had somehow been able to purchase and store a very large quantity of automobile gas in 2004, you’d be paying less than $2 a gallon not only today, but also for decades to come, assuming, as has been the case, that the increase in gas prices outpaces normal inflation. With every gas price increase, you’d be saving even more money. That’s exactly what you’re doing with the cost of electricity when you install a solar electric system.

Because installing solar is a fixed cost, savings increase as utility rates rise. There aren’t many investments that will offer you increasing returns over time, but that is precisely what solar does.  Therefore, solar PV systems actually appreciate in value over time as electric rates and bill savings increase.  This advantage alone makes solar a unique profit-earning investment.

Solar Adds Value to Your Home

You've invested in a solar PV system, but the question is, how much will that investment add to your home's resale value, if at all.  Thankfully, this question has been analyzed in two key studies that have conclusively demonstrated that solar adds significantly to home resale values.

A study from April 2011 by the Lawrence Berkeley National Laboratory looked at home sales (both homes with solar systems and homes without) in California over an 8 ½ year period beginning in 2001. The study concluded that California homes with PV systems sold for a premium ranging from $3.90 to $6.40 per watt of installed capacity over comparable homes without PV systems. The results from this study indicated that a solar home's value would reflect an extra $5.50 per watt of solar installed on average, suggesting that the added value to a home of a 5 kW system would be approximately $27,500.

Interestingly, the study found that the solar premium for retro-fitted existing homes was almost twice as much as for new homes.  Thus, depending upon how much a homeowner paid for their system (current systems are selling for sub $4.00/watt installed), the premium can reward homeowners with a positive return on investment at the time of sale.  We should remember, however, that this study was conducted in California, the state that currently dominates solar PV installations in the U.S.  The question remains open for the time being as to whether the same results hold for homes in a different states.

Solar panels don't just increase the value of a home, but they also reduce the time it takes to sell a home.  According to the U.S. Department of Energy, Solar homes often spend half as much time on the market as comparable homes without solar.  Their research shows that homeowners weigh energy costs as an extremely important factor in the decision to purchase a home. Energy-saving improvements make homes look more affordable to more people and attract attention in competitive real estate markets.

Realistically, these results make good sense as it is clear that the savings that solar homes provide are not only perceived as a tangible benefit by home buyers, but it is clear that the savings can be applied to purchase a more valuable home.  Thus, investing in solar will become more and more attractive as homebuyers become more and more accustomed to the value that solar actually provides.

Time to Payback = A Poor Metric

Among the most commonly discussed and simplest financial analysis is that of a system’s so-called payback period, which is nearly always included in project proposal documents.  It is calculated by analyzing monthly and then annual expected savings (based on projected annual kWh solar electricity generation), achieved by projecting average utility inflation rates, and then comparing that against total installed system cost, less rebates and tax incentives to derive the time period in which the investment will have paid for itself.  However, while it is intuitively attractive to solar sales professionals and buyers alike, simple system sayback analysis is problematic and ignores useful information relevant to making an informed decision.  Among the challenges of payback analysis:

compared to other investments on a pre-tax basis, therefore payback is not comparable to other capital investments.

For these reasons and others, simple payback is a poor test of project viability.  Additionally, it is ultimately counter-productive that the industry relies on this concept while also asserting the validity of other methods of investment analysis.  Investors do not think in terms of payback time for their stock, CD, home purchases or other monetary investments.  Nor do they do so for their purchases of energy-efficient appliances or hybrid vehicles, for example.

There is little question that we are stuck with this method of analysis for the time being and it will remain the case that projects will be red- or green-lighted on the basis of this crude metric.  However, those who sell solar should take the time to instruct their customers on the better methods of analysis we have at our disposal.

In the next article we'll discuss more of the best available metrics for evaluating the financial potential for a solar project including Lifecycle Payback and ROI Analysis, IRR and Net Present Value calculations, Lifecycle costs and Levelized Cost of Energy (LCOE).