Last month, millions of Texan households were without power due to the state's electric grid operator losing control during a massive winter storm. Residents were urged to prepare for more rolling blackouts and reduce their energy usage. According to the Texas Tribune, the grid was designed for the high demands of use during the summer months for air conditioning rather than all year long. However, due to the storm, residents were forced to stay at home relying on heating, creating a record amount of demand to which the state's grid could not uphold. Substations and transmission equipment were also mechanically impacted by the extreme temperatures-physically freezing to a point of critical failure. Most of the state's plants are run by gas, coal, or nuclear energy. The weather proved too much for most of these sources -- leaving many out of commission.

Despite Texas being the second largest PV powered state, where gigawatts of Sungrow products are deployed and almost 8 total gigawatts of solar installed, coverage of this crisis has consistently downplayed the resilience of solar. Most media outlets are not reporting on any other sources of energy, such as solar or solar + storage, in the context of the Texas crisis.

"Were it not for infrastructure failures, solar and PV+S plants would have continued to deliver power without interruption. We supplied the largest PV project in Wyoming--where temperatures routinely fall well below zero. Moreover, extremely cold weather occurs more frequently in that state, as well as many other North American locations that have not been subjected to these types of outages due in large part to planning and proper hardware.” With these infrastructure failures it was impossible for some PV plants to send power to the grid, causing the power they created to be unavailable to Texas residents.

Anticipating severe weather systems and temperature fluctuations is the first step in optimizing the grid for protection against extremities. In fact, Sungrow supplies gigawatts of solar technology solutions to regions with far more extreme climates. Sungrow recently deployed a landmark energy storage project to the Texas Grid, which is expected to operate safely and efficiently despite extreme weather situations. Energy storage at a similar scale will aid in proving safety, sustainability, and reliability. Another 497 MW project in Texas, had little to no issues during the storm despite it being the largest PV project in the Lonestar State. In an article by PV-Tech.org, Sungrow Sr. Technical Engineer, Neil Bradshaw stated, “Not only is every cell protected electrically in a three-tier BMS system with supervisory controls, but each small battery module has internal thermal barriers and suppression technology. Sungrow is eager to show the world that battery energy storage at this scale is a safe, reliable and sustainable solution to ensure grid reliability amidst demanding market operating conditions,” he added. By examining utility scale installations in Texas during this storm we can see how solar performed.

Sungrow's Texas Field Service Supervisor, Ernest Lira, noted the resilience of Sungrow products allowed for minimal operational issues during this storm. “The PV plants are all operating. The minor issues that manifested are purely related to the project not being protected with winterized configurations,” said Lira.

"Sungrow has projects in Canada, where winter storms are commonplace but due to the winterization of these products, they all remain operational," said Karsten Mall, Head of Sungrow North America.

Lack of planning allowed for such a situation to occur. Due to evolving weather conditions, unstable weather systems are more commonplace---policy makers need to be prepared. "As an international company, we strongly hope that climate change and abnormal weather patterns are taken into consideration when building projects in the future. We are fully prepared to support PV and storage installations in all types of conditions," Karsten Mall, Head of Sungrow North America added. 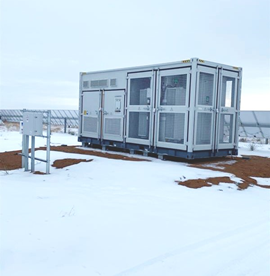